… From the letter sent to Bacciarelli … it transpires that he received some guidelines from Warsaw regarding the composition and expressed his readiness to conform to them and asked for the acceptance of his concept for the scale of the animals depicted. The paintings were ready in the last days of October 1767, a month after the agreed deadline, and on 31 October they were sent to Warsaw. In the letter of 17 September 1767 Roos apologized to Bacciarelli for not keeping to the agreed deadline, but explained it was due to his work on two large paintings for Catherine II and problems with transporting them to St Petersburg. … [D. Juszczak, H. Małachowicz, The Stanisław August Collection of Paintings at the Royal Łazienki. Catalogue, Royal Łazienki Museum, Warsaw 2016, no. 90, pp. 334–335.] 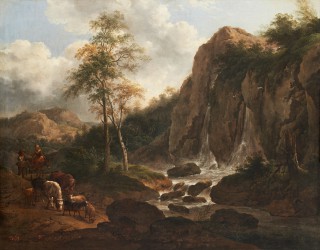 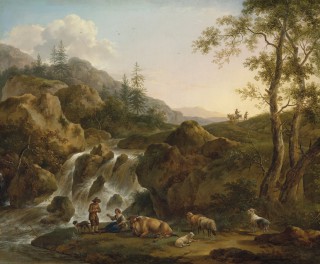 Mountainous Landscape with Waterfall and Resting Shepherds
Joseph Roos I
1767