Landscape with an Ox, Sheep and Seated Shepherd

... . The painting had a pendant which was lost during the Second World War ... . It depicted a similar landscape with a shepherd seated on the right and a cow which is lying down.

Landscape with an Ox, Sheep and Seated Shepherd is shown in an intimate setting. The figure of the shepherd and animals are seen from close up; the horizon is low, thus enabling the viewer to see very little beyond the foreground; only on closer inspection can we perceive the flat landscape in the background, with a river and boat and tiny figures, as well as the hazy silhouette of a windmill in the distance. There is something poetic and evocative about the scene which is depicted in the pinkish muted light of early twilight. This kind of ‘petits tableaux de paysages’ gained Casanova enthusiastic praise from Diderot in 1761 ... .

In Casanova’s free and sketchy brush strokes, to which the French critic drew attention, it is easy to discern the influence of Nicolaes Berchem, and that of 18th-century Venetian painting—known to the artist through his apprenticeship in that city— (cf. cat. nos. 28 and 29). ... . [See D. Juszczak, H. Małachowicz, The Stanisław August Collection of Paintings at the Royal Łazienki. Catalogue, Royal Łazienki Museum, Warsaw 2016, no. 30, pp. 135–137.] 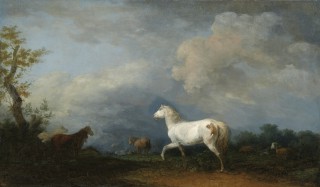 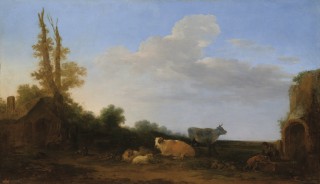 Landscape with Cows, Sheep, a Hut and Ruins
Francesco Giuseppe Casanova
after 1769