The pair of paintings [Landscape with Lakeside Gathering and Gathering in a Park] in the catalogues of the Stanisław August collection is given as by ‘Greffier’... .

... The paintings were not included in an entry about the painter in Saur’s dictionary ... ; the attribution to Ferg, however, does not give rise to any doubts.

Ferg combined landscapes with genre scenes, alluding to the 17th-century Flemish and Dutch tradition of Kermesses, as well as to the paintings of Italianate Dutch painters known as the Bamboccianti. ... It is generally believed that his earlier works are darker, with brown tones and darker greens and the compositions filled with crowds of small staffage figures. ... The majority of paintings from the artist’s later oeuvre, many of which have survived in English collections, by contrast have fewer figures of larger proportions, while the colouring, based on a palette of lighter greens, greys and blues, is closer to the rococo style. The colouring and staffage of the Łazienki paintings are characteristic of Ferg’s early style–reminiscent of work made during his Viennese period, namely before 1718.

Ferg often included Italianate buildings or ancient ruins in his fantastical landscapes ... , which he sometimes combined—as in the pair of Łazienki landscapes—with architecture of a northern character. In Landscape with Lakeside Gathering the right side of the composition is enclosed by the columns of a classical building in ruins hidden among trees, while on the left side we can see buildings and churches of a northern town alongside a squat Tuscan tower, giving the entire scene the character of a capriccio. The actors in these picturesque views–the ladies and gentlemen—are dressed in stylized 17th-century Dutch costumes. ... . [See D. Juszczak, H. Małachowicz, The Stanisław August Collection of Paintings at the Royal Łazienki. Catalogue, Royal Łazienki Museum, Warsaw 2016, no. 46, pp. 187–188.] 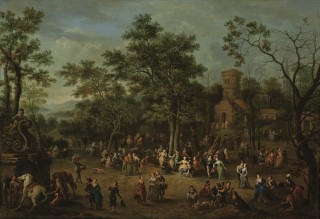 Gathering in a Park
Franz de Paula Ferg
1st half of the 18th c.