It is a pendant to the likeness of her mother (cat. no. 77; … ) and just like that portrait, it is a reduced, bust-length copy of the knee-length original by Nattier. The original, signed and dated 1740, … . It shows the model seated on a sofa, with a carved and gilded back rest, against a background with a column and drapery, in a richly-decorated dress and cloak for a masked ball (‘domino’), holding a mask in her hand.

Nattier’s original portraits of mother and daughter, which the author of the Łazienki busts used to make his copies, were not painted as pendants—they are not composed in the same manner and have a different character (the serene portrait of the mother stylized on a Muse of antiquity and the stately, monumental portrait d’apparat of the daughter; … —but they obviously functioned as such from the beginning: probably first in the home of Madame Geoffrin in the rue Saint-Honoré ( … ), then later at Madame de La Ferté-Imbault’s home, and that of her heirs. 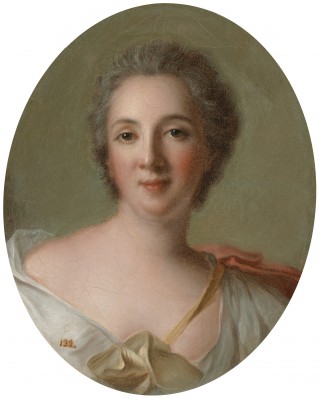