Bust of an Old Man in a Striped Caftan

… Nazari gained a reputation as a portraitist and his work was much sought after among the aristocracy and clergy. In these portraits he combined the realism of the Lombard school with a Venetian colourism … . He was also a highly-valued author of the teste di carattere (also teste di fantasia)—the imaginary figures, mainly bust-length, in fantastical or exotic costumes, much sought after by 18th-century art lovers. This type of representation was largely inspired by Rembrandt’s images of similar subjects … .

The history of the Venetian teste di fantasia has its roots in the 16th-century paintings of Titian and Giorgione. Eighteenth-century Venetian teste not only contain discernible elements drawn from Dutch tronies, but also elements of native tradition. The Łazienki painting shows the bust of an old man in a historiated costume, reminiscent of Italian Renaissance dress. In praising Nazari’s virtuosity, Tassi wrote that his teste were even sometimes thought to be the work of Giorgione himself, or Titian, by connoisseurs of art … . In the 18th century the ability to imitate another artist’s manner and create a pastiche was considered an expression of supreme artistic craftsmanship. … [D. Juszczak, H. Małachowicz, The Stanisław August Collection of Paintings at the Royal Łazienki. Catalogue, Royal Łazienki Museum, Warsaw 2016, no. 79, pp. 300–302.] 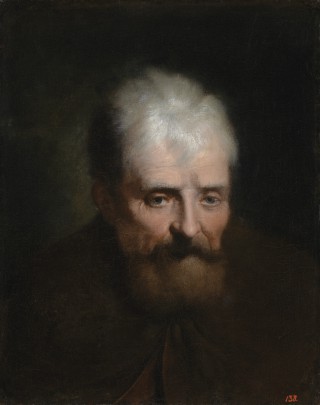 Head of an Old Man with a Beard
Bartolomeo Nazari
1st half of the 18th c.