Old Man in Cap with Brooch

The attribution to Nogari (although with a question mark) was proposed by Janina Michałkowa (Malarstwo weneckie XV–XVIII w. ze zbiorów polskich oraz ze zbiorów Muzeum Sztuk Pięknych w Budapeszcie, Galerii Drezdeńskiej, Galerii Narodowej w Pradze, exh. cat. (M. Skubiszewska et al.), Warsaw, Muzeum Narodowe, 1968, no. 119); Rodolfo Pallucchini (‘Note alla mostra di pittura venziana a Varsavia’, Pantheon, 27, 1968, no. 5, p. 372) agreed with the Polish scholar. .Michałkowa drew attention to the stylistic similarities between the Łazienki Old Man and Nogari’s The Miser in the Gemäldegalerie Alte Meister in Dresden (inv. no. Gal.-No. 589), where the fabric, beard and hair of the model are treated in the same way. Giuseppe Nogari, similarly to Nazari who worked in Venice at that time, was a painter of the teste di carattere type (cf. cat. nos. 79 and 80) which were very popular in Venice in the 18th century and which brought him fame and commercial success. Nogari’s teste—mainly the heads of old men, philosophers and monks—had many buyers from the 1730s onwards from among English clients and in Germany and were very highly valued … .

The Venetian teste, also known as teste fatte a capriccio: likenesses of imaginary figures, often in fanciful headdress, were inspired by the Dutch tronies and sometimes described by contemporaries also as all’olandese. The inspiration for the Łazienki painting could have been an etching by Rembrandt with a depiction of a bearded old man with a velvet beret and jewel dating from 1637 … , or wearing a fur cap and velvet garments dating from 1632 … . 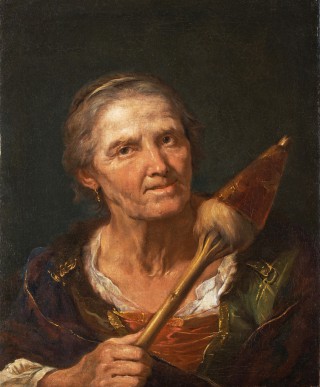 Portrait of an Old Woman with a Spindle
Giuseppe Nogari
1st half of the 18th c.