The sculpture of the Dancing Satyr has stood in front of the Palace on the Isle since 1780. It is made of white marble, and was sculpted in Rome in 1776 by André Le Brun. It is a copy of a 3rd century Hellenistic sculpture kept in the Uffizi Gallery in Florence.

Satyrs were the troops of Bacchus, the god of wine. They were often pictured dancing, or chasing nymphs or maenads (bacchantes). The Satyr standing in front of the Palace on the Isle has two small horns on his head, as well as a small goat’s tail. He holds an Ancient Greek percussion instrument, a karatalas instrument (also known as kymbala) consisting of two disks. He leans his right leg on the second instrument. It was a type of a knocker (also known as kroupalon or scabellum), which was used to set the pace. Consequently, the Satyr is not dancing, but playing; he is probably taking part in a procession filled with dance and music to honour Bacchus. The statue of the playing Satyr is a pair for the Bacchante sculpture. 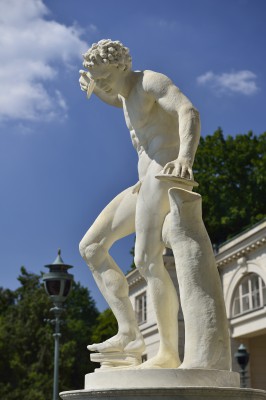 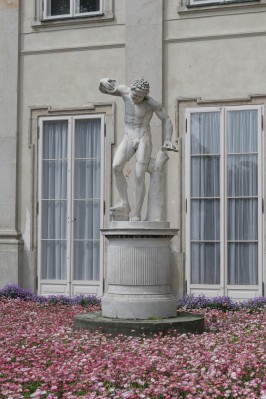