The small building was constructed amidst dense trees at a certain distance from the central buildings of the Royal Łazienki. It was supposed to be a place where its owners could find refuge from everyday hassles and spend time alone with their thoughts.

The Hermitage building stands in the northern part of the garden, near the Jan III Sobieski monument. The Hermitage (ermitage in French - hermitage, refuge, retreat) existed in the times of Stanisław Herakliusz Lubomirski. It was a small pavilion on a square plan, most likely designed by Tylman van Gameren. Here, Lubomirski would study, write literature, and indulge in philosophical reflection. He found good conditions in this quiet area covered with a forest of the former Ujazdowski Castle Hunting Grounds.

The Hermitage burned down at the beginning of Stanisław August’s reign, and it was rebuilt according to a design by Domenico Merlini. It ceased to be a place for quiet retreats and began to be used as a residence of Stanisław August’s friend. At the King’s invitation, in 1777, his French mistress (and reportedly a fortune teller) Henrietta Zofia Lhullier moved to the building. In the 19th century, the Hermitage was expanded and underwent a minor conversion.

The Hermitage is another example of the Ancient architecture’s influence. A similar building existed in Tivoli, near the villa of Emperor Hadrian (2nd century). Hermitages derived from monastery hermitages (dwellings of hermits). Similar small garden pavilions were often built at the end of the 17th and in the 18th century, especially in France and Germany, but also in Italy as well as Northern and Eastern Europe. Among the English examples are such buildings as the hermitages in the Stourhead Gardens and in the Manor Gardens Eastbourne, among the French ones - Pavillion de l’Ermitage in Bagnolet, and the Russian Hermitage in Peterhof. 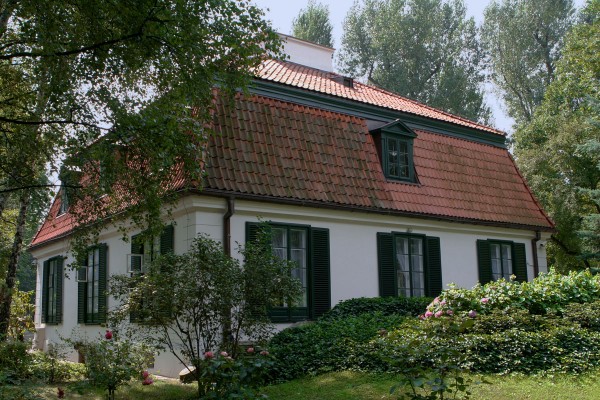