THE ROYAL THEATRE AND THE OLD ORANGERY

The Old Orangery was built to house exotic trees in the winter season. It is also a place which is very closely linked to art and culture. The Royal Theatre is situated in the Old Orangery, as is the Gallery containing Stanisław August’s collection of sculptures.

The Old Orangery was raised in the years 1785-88, according to a design by Domenico Merlini, court architect to King Stanisław August. The Royal Theatre is one of the few surviving authentic eighteenth-century court theatres in Europe, and the only one of its kind in Poland. 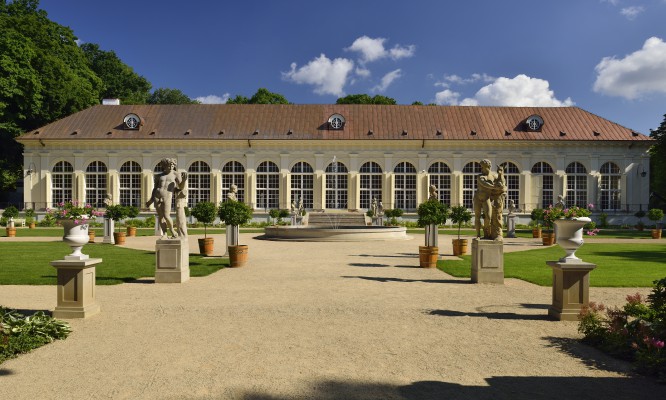 The entrance to the Royal Theatre 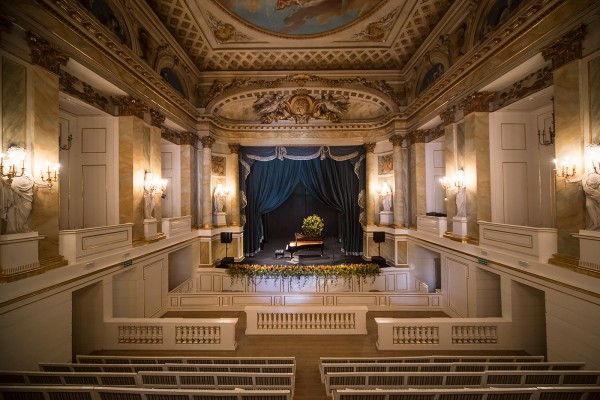 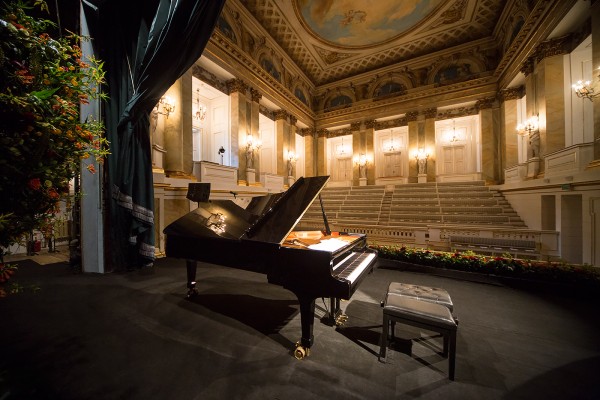 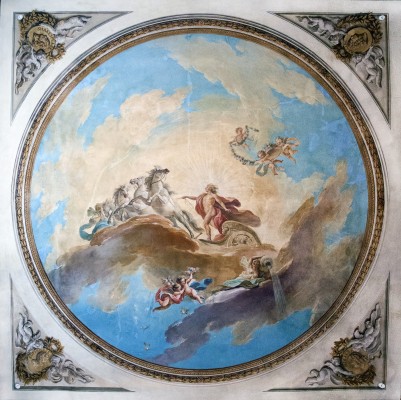 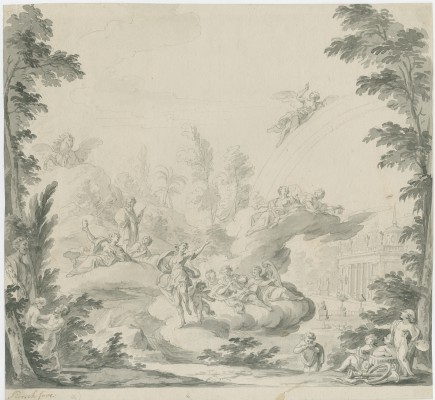 The Royal Theatre: curtain (no longer existing) showing Apollo and the Muses on Mount Helicon 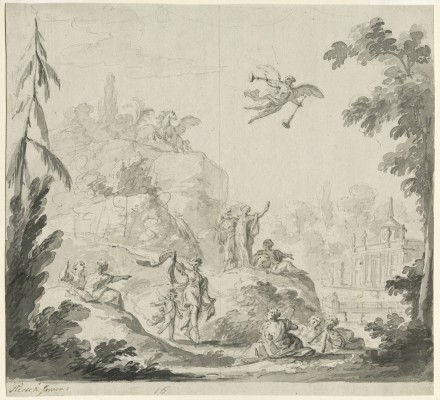 The Royal Theatre: curtain (no longer existing) showing Apollo and the Muses on Mount Helicon

This is one of the few surviving authentic 18th-century court theatres in Europe, and the only example of its kind in Poland. The interior is constructed of wood, which provides superb acoustics. In places it has been covered with marbleized polychromes.

The two-storey auditorium can accommodate 200 spectators. On the ground floor level, simple benches are set on risers, while the first floor contains nine theatre boxes, three on each side of the auditorium. The central one, located directly opposite the stage, was reserved for the King. Set between the boxes are eight female figures made of stucco, holding gilded wooden candlesticks. The figures were designed by the royal sculptor Andre Le Brun, and executed by his assistants working at the royal Sculpture Studio - Giacomo Monaldi and Gioacchino Staggi.

Above the boxes, the illusion has been created of yet another level, with illusionistically painted semi-circular arcades decorated with stucco work, filled with an 18th-century court audience. The creator of this decoration, as well as the remaining illusionistically-painted architecture, was the talented royal artist Jan Bogumił Plersch. 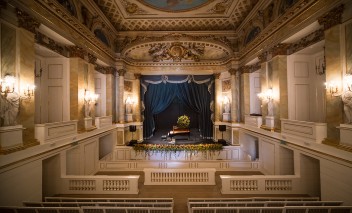 The theatre was opened on 6 September 1788. The interior decoration gained a great deal of admiration. One of the invited guests, a Frenchman by the name of Renaud, who was then spending time in Warsaw, expressed this in the following words: "A fortunate combination of Roman taste with French - just like what existed in the magnificent years of Louis XIV - gives this theatre a striking quality of grandeur and opulence".

The Sculpture Gallery in the Old Orangery, alongside the Picture Gallery in the Palace on the Isle and the Gallery of Prints in the White Pavilion, is one of three principal galleries at the Royal Łazienki, which was furnished according to the king's inventory of 1795. From the very beginning of his reign, Stanisław August collected marble statues and plaster copies of the most famous antique and early modern works of art. Some of them were commissioned with a view to complementing the ideology underlying the interior design in the royal residences, as in the case of the Farnese Hercules and Belvedere Apollo in the Ballroom at the Palace on the Isle or the statues of kings in the Rotunda - the pantheon of Polish rulers.

However, the most numerous objects in the royal collection were the sets of plaster casts - this collection of a didactic nature, according to the 1795 inventory, included 563 works of art.

The most interesting and "one of the most characteristic realizations of the idea of the Enlightenment" is the design of the Royal Sculpture Gallery in the Old Orangery, known as the "Kamsetzer Colonnade". In the design, the most famous copies of Ancient sculptures are displayed against a background of whimsically painted architecture and an idyllic Italian landscape. The Laocoon Group, Farnese Hercules, Farnese Flora, Apollo Belvedere, Meleager, Amazon Mattei, and Hermes Ludovisi are laid out in a pattern of "alleys of statues in Italian gardens". The design executed by the Dresden-born artist Johann Christian Kamsetzer was intended to embody Stanisław August’s idea of a modern public museum and August Moszyński’s conception of an "ideal museum".

For decades, historians believed that the design of the so-called Kamsetzer Colonnade never came to fruition. It was only in 2012 and 2013 when discoveries made during conservation works revealed preserved 18th century paintings hidden behind the plasterwork in the Old Orangery. The detailed nature of Kamsetzer’s designs made it possible to not only carry out conservation works, but also to recreate the Sculpture Gallery according to the King’s conception.

The project, which Stanisław August never managed to complete, could be accomplished thanks to collaboration with the workshop of the Collection of Plaster Moulds of the Berlin State Museums (Gipsformerei, Staatliche Museen zu Berlin). The Berlin Glypthothek – which owns a collection of more than seven thousand casting moulds and bas-reliefs – made plaster copies of the three missing sculptures from the "Kamsetzer Colonnade". Applying the historical casting process and using 18th century moulds, the following sculptures were cast: The Laocoon Group, Apollo Belvedere, and Meleager. Today, these casts are displayed in the Royal Sculpture Gallery in the Old Orangery. 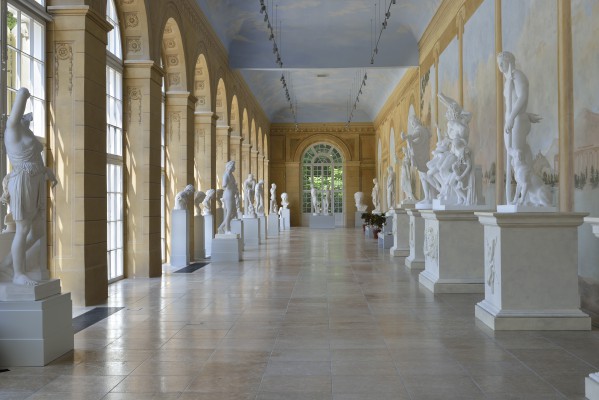 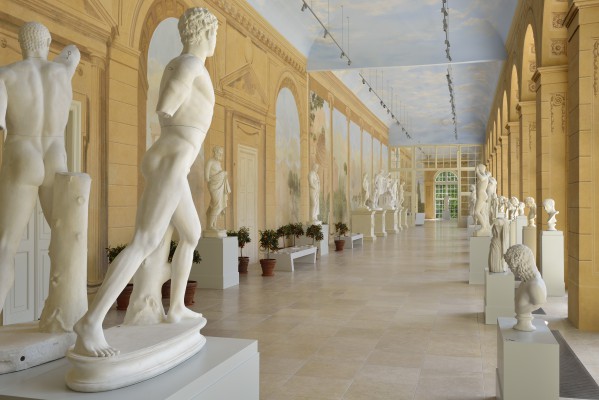 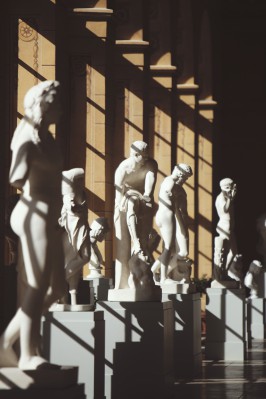 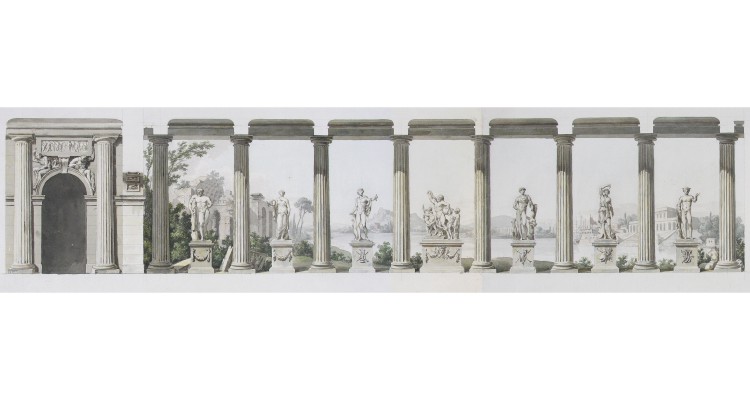 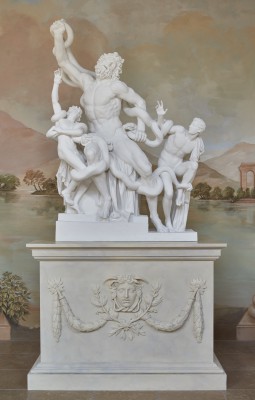 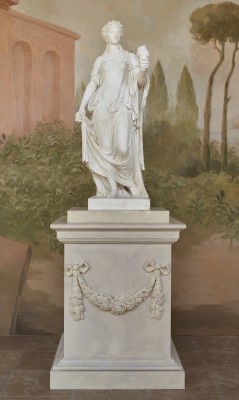 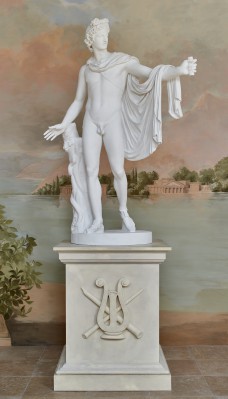 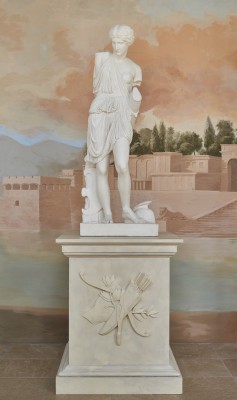 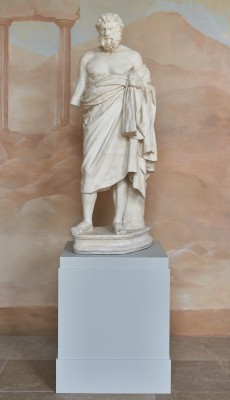 Old Orangery as good as new

Following the refurbishment, which was carried out in the Old Orangery in the years 2012-2016, the historic buildingreturned to the appearance and function that it had assumed at the time of king Stanisław August. The funds were obtained from theEEA Financial Mechanism, the Norwegian Financial Mechanism and the Ministry of Culture and National Heritage.

The PLN 34 million worth project encompassed the following: Restoration of the Royal Gallery of Sculpture, a new design of the Gallery of the 19th and 20th Century Polish Sculpture, the revitalisation of the Orangery Garden, the creation of an Education Zone – the Artist’s Workshop as well as a modern fire protection system for the Royal Theatre. In addition, the Old Orangery was adapted to the needs of visitors with disabilities – for which the Royal Łazienki Museum was awarded a prize in the "Warsaw without Barriers" competition.

The Old Orangery in old photographs 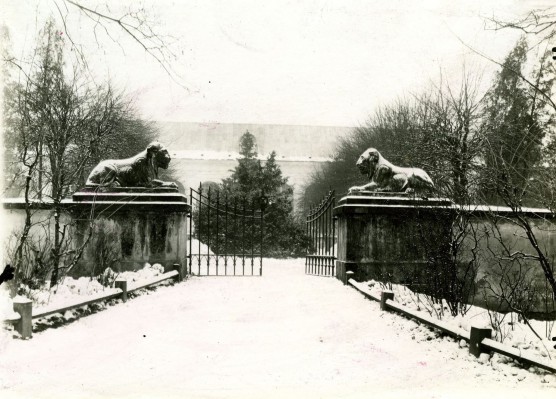 The entrance to the garden by the Old Orangery, 1915, photo Juliusz Kłos 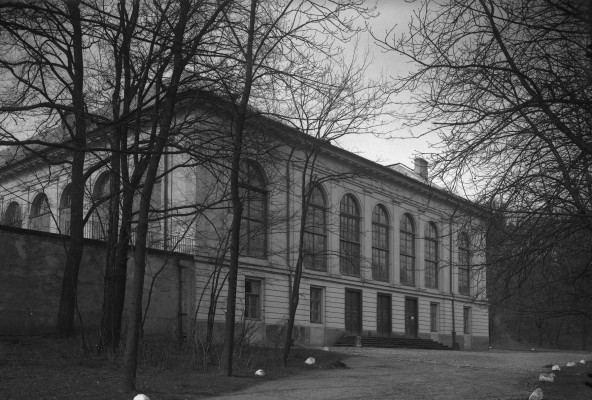 The east of the Old Orangery, 1916, photo Juliusz Kłos 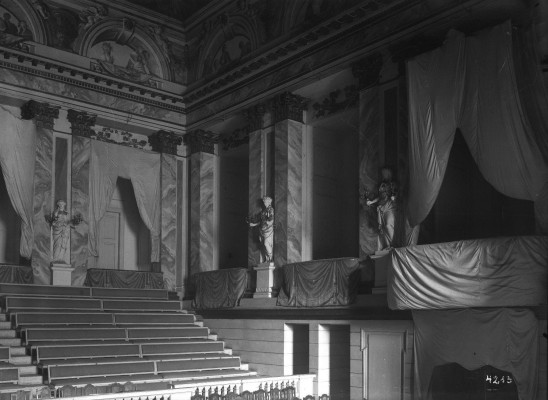 The Audytorium and boxes of the Royal Theatre, 1916, photo Juliusz Kłos 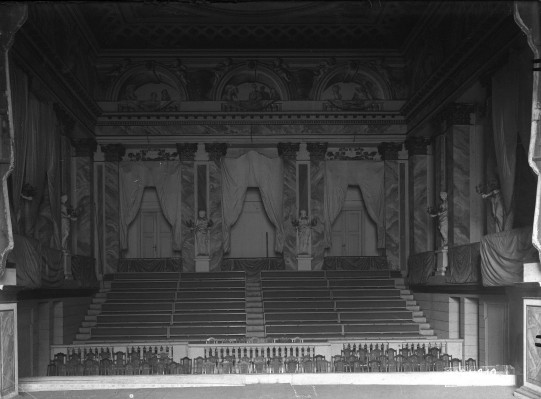 The Royal Theatre - the auditorium 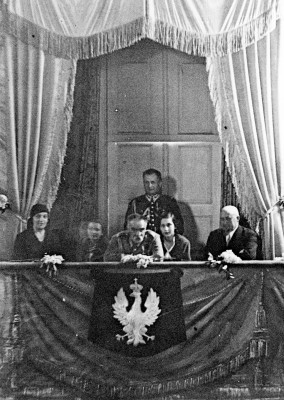 Field Marshal Józef Piłsudski and his wife Aleksandra and daughters Jadwiga and Wanda in their box at the Royal Theatre, 1931, photo Witold Pikiel 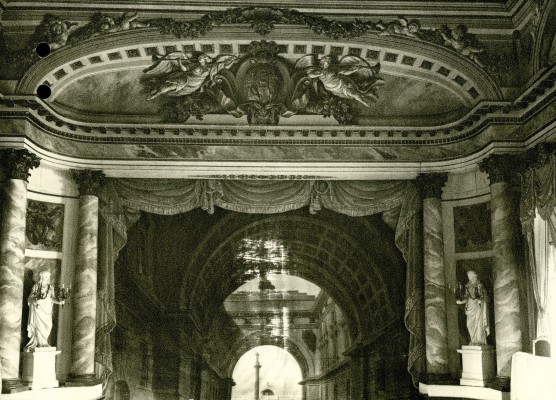 The stage of the Royal Theatre with the curtain showing the Great Ark of the Admiralty building and square in front of Hermitage in St. Petersburg, 1919, photo J. K. Jaworski 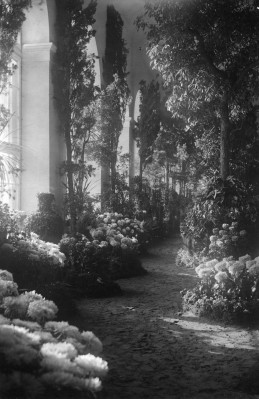 The Old Orangery
Objects on the map
full map