The Washerwoman (A Woman Washing Clothes in a Tub)

This is one of several paintings in the possession of Stanisław August which came from the Johan Aegidiusz. van der Marck (1707–72) collection. Bought at the posthumous sale of this collection in 1773 in Amsterdam by the art dealer, Yver, they ended up in Warsaw, probably in late 1774 … .

… . It is one of several small genre scenes with single figures of young women (mainly maids) engaged in their daily work, in a domestic setting, which Metsu painted in the years 1656–57 … . Two of them—the Łazienki Washerwoman and A Woman Scouring a Pan (location unknown; … ) are depicted against the stone arch of a window niche. Metsu borrowed this format—a so-called nisstuck or vensternis—from Gerard Dou. The figures are shown knee-length (and not half-length as in Dou), close-up, and the background is somewhat undefined, treated rather perfunctorily—this was, in turn, inspired by the art of Gerard ter Borch. Metsu often imitated the style and borrowed motifs from the works of other genre painters, however, as Waiboer pointed out, the traditional themes of well-established iconography he altered and interpreted anew. He also introduced to Dutch painting subjects previously unknown, The Washerwoman being such an example—perhaps the earliest depiction of a woman doing the laundry in Dutch art (Waiboer 2012, p. 49 [A.E. Waiboer, Gabriel Metsu. Life and Work. A catalogue raisonné, New Haven 2012]). The subject of the painting is an exaltation of domestic life, a common feature in this type of painting since the mid-17th century: a woman attending to her daily chores personifies the highest virtue of such life.

Stanisław August purchased The Washerwoman together with The Smoker (An Old Man Holding a Pipe and a Jug), which was put up at the van der Marck sale (under no. 179) as its pendant, and also sold to Yver (no. 55 in the catalogue of the Stanisław August collection), now the property of the National Museum in Warsaw (inv. no. MOb.492, … ). … . [See D. Juszczak, H. Małachowicz, The Stanisław August Collection of Paintings at the Royal Łazienki. Catalogue, Royal Łazienki Museum, Warsaw 2016, no. 73, pp. 277–278.] 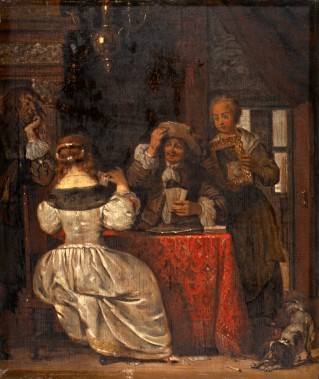