Jakub Henryk Flemming (1667–1728), Lithuanian Master of the Horse, General of the Lithuanian Artillery 1710–14, and 1711 Saxon Generalfeldmarschall, Minister and Advisor to August II, was, like Jan Jerzy Przebendowski, Stanisław Denhoff and Jan Sebastian Szembek, in favour of the Elector of Saxony’s election to the Polish throne. After the election, Flemming became one of the most influential dignitaries in Poland.

The painting belongs to a group of 15 portraits which are traditionally believed to have been acquired by Stanisław August in 1764 from Kasper Lubomirski, together with the Ujazdów estate (for the series see cat. no. 48). … . In the 1783, 1793, 1793–95 and 1795 catalogues of the Stanisław August collection, the painting is recorded as being an anonymous work; in the draft of the main catalogue of 1793–95 the name ‘Maniocki’ [sic] appeared. … . Stanisław Iskierski (1931) and Béla Lázár (1933)—the latter dated the portrait to 1713—believed it to be the work of Ádám Mányoki, and it was thus published in the 1964 and 1967 catalogues of the National Museum in Warsaw, … ., Enikő Buzási (2003) rejected this attribution believing it may have been a studio copy of a portrait by Antoine Pesne, known only through an engraving by Anton Balthasar of König dating from 1716 … .

There is a clear affinity between Pesne’s composition engraved by König and the Łazienki painting—the sitter’s pose and the head are almost identical. The face on the painted portrait is older, with a receding hairline on the temple. The garments also differ—the full armour was replaced with a cuirass worn over a red velvet justaucorps. The blue riband of the Order of the White Eagle, which Flemming was awarded in 1717 … . NB, on König’s engraving dated 1716, the riband (which is incorrectly shown on the right shoulder) must be that of the Russian Order of St Andrew, which Flemming received in 1709. … . [See D. Juszczak, H. Małachowicz, The Stanisław August Collection of Paintings at the Royal Łazienki. Catalogue, Royal Łazienki Museum, Warsaw 2016, no. 85, pp. 315–318.] 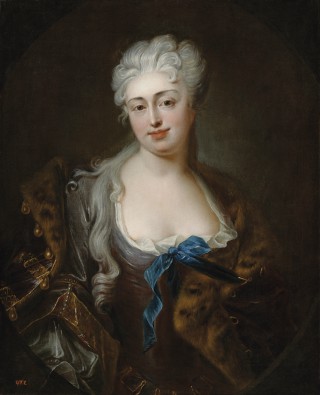