Maria (Marianna) Denhoff née Bielińska (c. 1685–1730), daughter of the Grand Marshal of the Crown, Kazimierz LudwikBieliński; sister of Teresa (cf. cat. no. 68); 1703–19 wife of Bogusław Ernest Denhoff, Chamberlain of the Grand Duchy of Lithuania. In the years 1714–19 she was ‘maîtresse en titre’ to King August II the Strong; later she married Jerzy Ignacy Lubomirski, Field Writer of the Crown, with whom she had a son, Teodor, the heir to Ujazdów.

The painting belongs to a group of 15 portraits which are traditionally believed to have been acquired by Stanisław August in 1764 from Kasper Lubomirski, together with the Ujazdów estate … . The list of paintings which could be found in Ujazdów Castle in 1765 … does not mention a portrait of Maria Denhoff, although it is possible the Łazienki likeness is one of the 19 ‘portraits of ladies’ recorded there. It is to be assumed that these were the portraits of beautiful women from the time of August II, which he may have accumulated at Ujazdów Castle in the period when he leased it from the Lubomirskis—in the years 1720–33.

The Łazienki painting is a copy of an original which Ekhart Berckenhagen attributed to Antoine Pesne and dated to 1718 (E. Berckenhagen, P. du Colombier, M. Kühn, G. Poensgen, Antoine Pesne, Berlin 1958, nos. 73a and b)… . [D. Juszczak, H. Małachowicz, The Stanisław August Collection of Paintings at the Royal Łazienki. Catalogue, Royal Łazienki Museum, Warsaw 2016, no. 84, pp. 316–318.] 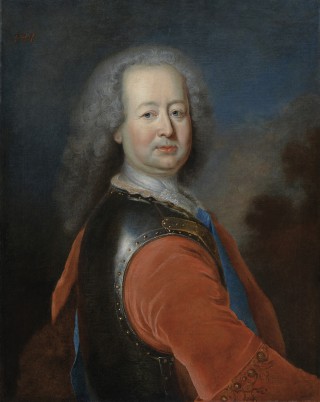