The story of Actaeon who, as a punishment for peeping at the goddess Diana bathing, was turned into a deer, which was later rent asunder by his own dogs, was very popular in art. Its interpretation by Ary de Vois—as in the present painting—differs significantly from the rather conventional representations of this episode taken from Ovid (Metamorphoses III 193) by other painters. The majority of painted versions of the subject emphasized the bathing scene, with Actaeon shown in the background as an observer, often in the moment of his metamorphosis. De Vois, however, makes Actaeon the main figure in his painting; he seems unaware there is a goddess in the grotto in the company of nymphs, who have already noticed his presence.

The Italianate landscape with the picturesque ruin alluding to the Temple of Vesta in Tivoli is shown in the background of a large imaginary arcaded grotto against which Actaeon is standing—a characteristic motif of landscape painters such as Cornelis van Poelenburch, and Abraham van Cuylenborch, working in Utrecht, where de Vois was trained and worked before moving to Leiden. NB the latter depicted the bathing Diana several times in such scenery … [D. Juszczak, H. Małachowicz, The Stanisław August Collection of Paintings at the Royal Łazienki. Catalogue, Royal Łazienki Museum, Warsaw 2016, no. 113, pp. 413–414.] 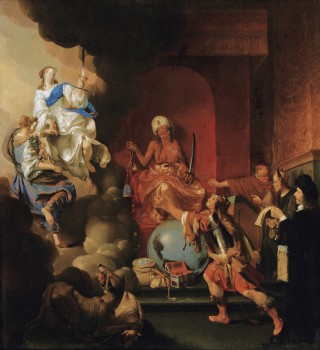