Injustice Enthroned (Satire of Louis XIV during the Dutch War (?))

From the end of the 18th century the painting was incorrectly described as Political Satire of the Elector Friedrich Wilhelm the Great.

Until 1773, the painting belonged to Johan Aegidiusz. van der Marck (1707–72), four times Burgomaster of Leiden, Governor of the East India Company in Amsterdam, and a collector; it was put up for auction at the posthumous sale of his collection held on 25 August 1773 in Amsterdam. ...

The catalogues (the Dutch and French versions) of the van der Marck sale included a detailed iconographic description of the painting, explaining the meaning of all the figures and characters. The entry in the 1783 catalogue of the Stanisław August collection repeats, almost word for word, the text of the sale catalogue (its French version), together with the last sentence concerning the painting’s artistic merits. … In the entry of the 1793 catalogue of the Stanisław August collection, the figure of a man in armour has been described as showing the ‘Grand Electeur de Brandenbourg’: in other words, Friedrich Wilhelm I, known as the Great Elector, who reigned from 1640–88. Such identification was then repeated in the archival sources and literature and has not been questioned to date, although, in our opinion, it is erroneous … .

According to the description in the van der Marck sale catalogue, Injustice (Dutch: Ongerechtigheid, French: Injustice), in the form of gargoyle, with a sword on the left and scales in the right hand, dressed in a turban with a toad on the forehead and an entwined snake around the waist, is sitting on a throne, resting her feet on the globe of the earth. In Christianity the frog and snake were associated with the devil, a lack of chastity, death and sin, while the toad is also the attribute of Injustice in Ripa’s Iconology. In the left part of the composition, in a white robe, Justice (Dutch: Rechtvaardigheid, French: Justice) with a scarf over her eyes, scales and a sword, extends her hand towards the female figure with a laurel wreath and holding an olive branch, which in the Dutch version of the sale catalogue is described as Mercy (Barmhartigheid) and in the French one as Humanity (Humanité). On the opposite side a man in a monk’s habit, with horns on his forehead and animal ears and a diaphanous band on his eyes symbolizes Artifice, Lies, Hypocrisy (Dutch: Bedrog, French: Fourbe), which are presented—as shown by his costume—by the Catholic Church. The monk holds a thorny branch in his right hand which is the symbol of sin, while in the left, he holds a rooster, which here could allude to unbridled lust or may be an allusion to France, if we maintain the hypothesis that the painting is an allegory of the Dutch Wars. Standing next to the monk is a man with ass’ ears wearing a crown, who—according to the description in Van der Marck’s sale catalogue—symbolizes Meanness or rather Avarice (Dutch: Gierigheid, French: Avarice); he may also symbolize Stupidity due to the association with Midas. The ass’ ears were also an attribute of Impiety, Iniquity and Crime. … [D. Juszczak, H. Małachowicz, The Stanisław August Collection of Paintings at the Royal Łazienki. Catalogue, Royal Łazienki Museum, Warsaw 2016, no. 114, pp. 415–418.] 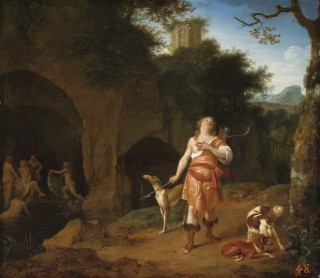