CONSERVATION OF THE ROYAL COLLECTION OF PAINTING

Habent sua fata imagines. This paraphrase of the famous Latin sentence can be applied to the faith of the collection of paintings assembled by King Stanisław August.

The conservation and restoration the royal collection carried out lately constituted a spectacular challenge in the history of the Łazienki Królewskie Museum. Although we realize that visual effects appeal best to our Visitors, we would like to familiarize them with the results of some of the conservation endeavors. We have chosen these which, in our opinion, will be the most interesting and most appealing to them.

The most spectacular effects stem from the studies and work on the paintings of Jan Peeter Verdussen. The Poultry Market and its counterpart TheFish Market were treated as a twosome in the collection and they were displayed together in the Cabinet adjoining the Salomon Hall (presently the Portrait Hall) of the Łazienki Palace. During the course of the work and following a deep analysis, they began to successively reveal their secrets. Although they have always functioned in this collection as reciprocal pendants, from a conservator’s point of view they presented quite dissimilar problems and required a distinct treatment. An in-depth analysis carried out during the conservation and associated studies lead to surprising conclusions. They forced the team of conservators and the museum’s personnel to reconsider the need to take deliberate, yet crucial decisions. It is in their result that one of the paintings’ aspects changed so dramatically.

Both paintings are signed. The author of both compositions is the 18th century Flemish painter and draftsman Jan Peeter Verdussen (1700 – 1763), known primarily for his nature  and battle scenes. He developed his skills under the eye of his father, the painter Peeter Verdussen. We worked in Antwerp, in the south of France and in Turin. Until 1744 he was the director of a painting school in Marseille. 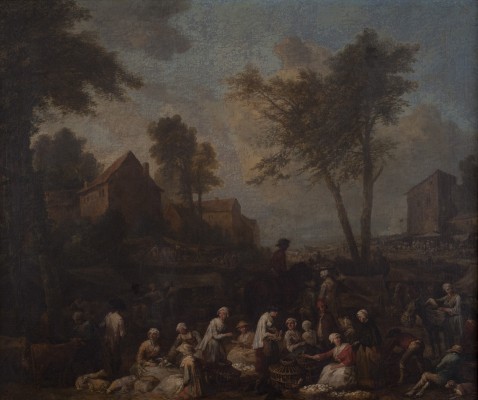 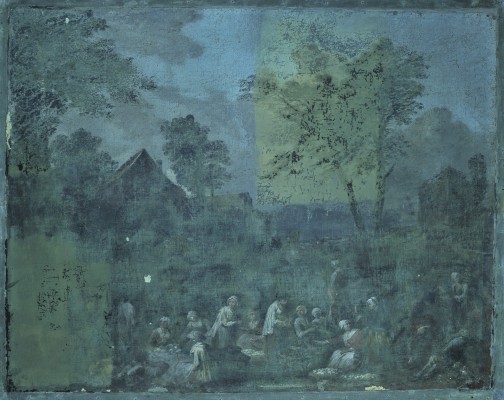 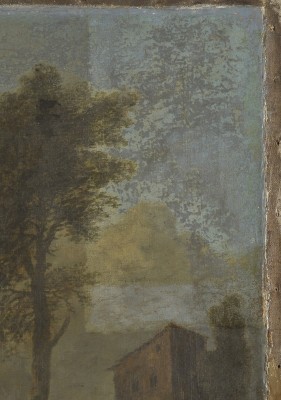 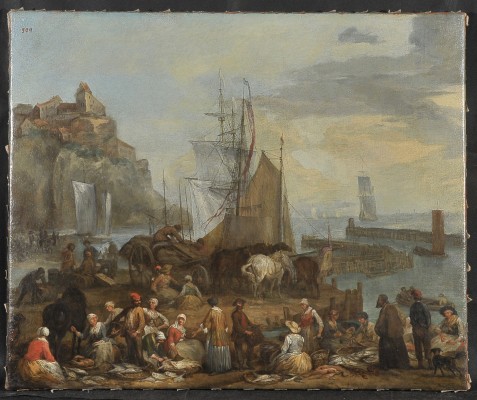 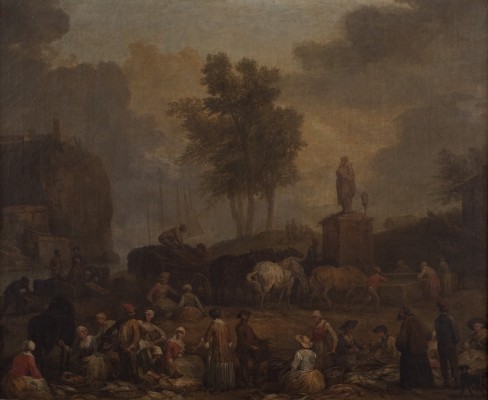 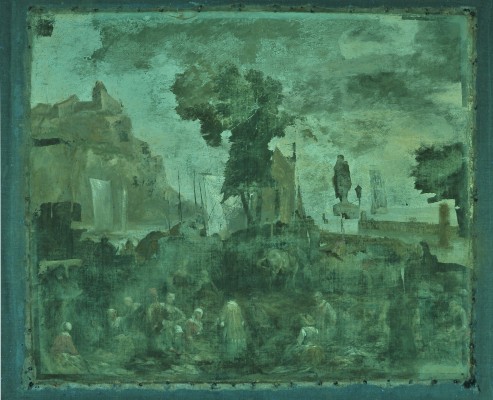 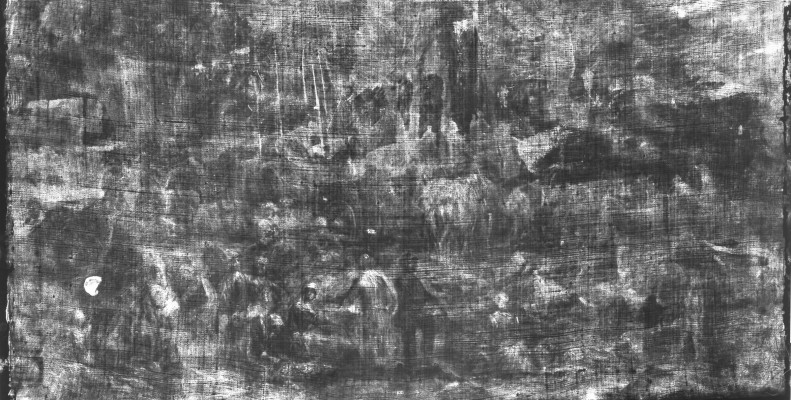 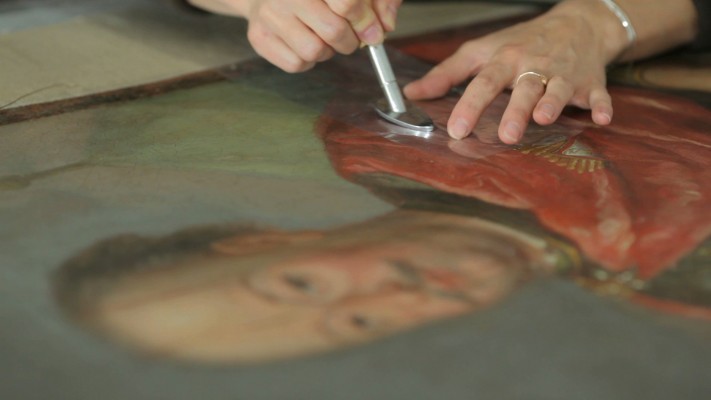 Immediately after the launch of work, the state of preservation of the paintings, previously defined as expositional, begun to reveal its true facet. A creeping erosion of the support, the decay of the lining’s binders – these are quite significant damages, yet no as legible to the visitors as surface dirt, the multiple yellowed layers of a sometimes additionally tinted varnish and the vast, coloristically altered repaints. And although the cleaning – in accordance with the art of conservation – was realized in stages, millimeter by millimeter, gradually penetrating the deposits, it soon appeared that there was no return. Layers superimposed during successive repairs and conservations were too altered and the revealed original, although damaged, astonished with is superior artistic standard and begged to be exposed. From The Poultry Market were removed two layers of a yellowed, non-original varnish, as well as the stippling from three chronological layers, including extensive, altered repaints covering abrasions in the part of the sky. In the lower section of the painting came to light the details of the composition and the nuances in the artist’s painting technique. Doubts emerged during the analysis of a fragment representing a horse with a rider. They concerned a painting manner different from the rest, a certain clumsiness, a odd positioning and disturbing proportions in respect to other staffage figures. The manner of painting the rider may be compared to the study of the man with the basket represented in The Fish Market. The results of an X-ray analysis confirmed the presumed structure of the work and confirmed that to paint The Poultry Market, the artist used a canvas with a drawing of a entirely different composition. Thus, on the X-rays we do not see the author’s pentimenti to The Poultry Market. The author’s basic composition, the one we consider to be the original, covers a draft for a totally different painting. The X-rays clearly reveal the these details. We shall try to describe them, starting from the left:

- near the left edge of the picture appears the outline of a horse’s legs;
- in left lower corner below the standing figures of a woman, a man and a veal, there is a draft of a boat pulled by two bent men;
- farther to the right, below the first group of seated women, two other male figures pull a boat;
- above the men, the draft of an undefined architectural structure and a tree trunk tilted to the right;
- below the figure of the horse with the rider, the outline of two horses; the horses are represented en trois quarts, with heads facing the opposite way than the ones in the picture; the horserider faces the same direction than his counterpart on the surface, and his stance seems to be more natural;
- in the place of the first poultry cage there is a small dog;
- farther to the right, in the place of the of the woman sitting near to the egg baskets and the second one next to her, there is a third horse shown en trois quarts;
- in the place of the woman riding a donkey there is a larger figure.

Following this analysis, the matter of the „giant” rider remains unsolved. It is impossible to unequivocally affirm if in this case we deal with an once recklessly uncovered pentimenti, or an ancient intervention by a restorer. Or perhaps both? Therefore, The Poultry Market has recovered its original sheen, but the composition has not been significantly modified. All the secrets remain hidden under the paint layer and may be viewed on X-rays.

The Fish Market is another story. Prior to the conservation, the painting, similarly to its pendant, was coloristically altered by many layers of yellowed varnish, repaints and retouches. The repaints layer, poorly bonded to the underlying paint layer, detached from its support, because it has been applied over a layer of oxidized linoxide and a layer of varnish. This condition was an encouragement to reach for cotton and solvents. The cleaning of dirt began, varnishes were removed. In a next step were exposed thickly laid, matt and coloristically dull repaints of the parts of the sky, probably very old but of little artistic value. Work was continued with caution when it became obvious that the Fish Market could no longer function in this condition. The removal of these fragments resulted in a necessity to persist. Yet, despite such evident indications, the work was many times interrupted to deepen the analysis, to convene a commission and to jointly decide about further moves. Already at the stage of making exposures and repaints removal were confirmed major alterations of the composition. Although one of the reasons for the repaints could have been a deterioration of the original, the painting was not repainted along the form, but transformed with elements drawn from Verdussen’s oeuvre. The avalanche then began. It was established that the surface varnish, locally colorized with paint and applied in an uneven layer, hid abrasions in the paint layers and craquelures. Although the entire part of the sky was covered with repaints, underneath there were outlines of details, such as the horizon line with a sail boat and, below, a the entrance of a harbor. Under the tree and the house situated on the right, the sky continued with the horizon outlined. It appeared that the figure on the pedestal also reposes on the repaint layer. From underneath the grey cloud on the left side of the painting emerged a mountain with a castle and buildings, and below it,  a bay with sail ships and boats below. Underneath the tree in the center of the composition loomed faded sails with cordage and pennants and, below the tree, a grey-ochre repaint of the elevation’s ridge with figures. On the left of the elevation, under the repainted cart appeared another one, similarly oriented, but slightly shifted to the lift; below the figure on the cart there is another one, in a different stance. Some doubts concerned certain other staffage figures, i.e. the man with the basket.

We may assume that the painting underwent conservation several times: in the 18th century or at the centuries’ turn, in the 19th century or at the turn of the 19th and 20th centuries, and finally in the 1960s. The first intervention in the 18th century or at the turn of the 18th and 19th centuries consisted in the repainting of an already damaged work to match it to its pendant – the Poultry Market. The indirect reason for these repaints - the damages sustained by the paintwork – were fully revealed during further work. This 18th century repaint used compositional elements occurring in other Verdussen’s works. A decision was taken to remove the repaints, coloristically feeble and unnecessarily smoothing the surface of the paint layer, as well as inacceptable artistically. The composition revealed initially, of a much higher artistic level, surprised by its detail, i.e. the harbor entrance. In the original, analogies were found with the representation of the staffage’s backstage figures in the Poultry Market painting. All decisions were taken collectively following in-depth studies carried out at successive stages of the painting’ cleaning. Work was interrupted to consult and discuss every subsequent step with the Museum’s staff. During a thorough conservation and restoration, the extent of which unexpectedly widened, the destructive process was stopped, later layers were removed and replaced with new ones meeting modern requirements and fully restoring the painting’s artistic values. The meticulous reconstruction of seascape elements was consulted with an expert. A wealth of descriptive, photographic and research documentation was produced. At present, the paintings may quietly rejoin the Paintings Gallery of the Palace on the Isle.