The New Guardhouse - Trou-Madame, the Small Theatre known as the Comedy Theatre

In the place of the contemporary New Guardhouse, an entertainment pavilion known as Trou-Madame was built in the years 1779-1780. Its name came from a popular 18th century game, which consisted in rolling balls through special gates. It was a low, single-storey Chinese-style building adorned with landscape polychromes and painted imitations of a garden arbour.

In 1782, the New Guardhouse was transformed into a court theatre known as the Little Theatre (or the Comedy Theatre). In 1788, it was expanded with an adjoining brick building, where the Royal guard stationed.

In 1830, the Little Theatre was transformed into a guardhouse. Then, a small structure was built - featuring heavy architectural forms and raw decorations proper for the military function of the pavilion (architect - Jakub Kubicki). This function is illustrated by the decorations in the form of masks of guards wearing helms and bas-relief collections of armour (the so-called panoplia) above the windows. 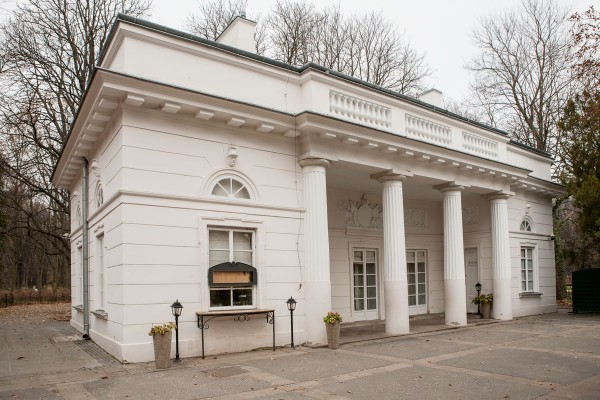