The lot of 95 old master prints illustrating Ovid’s Metamorphoses was exhibited until recently on the second floor of the White Pavilion in the Łazienki Królewskie in Warsaw. Some of these works, originating from the collection of Stanisław August, were stored there since the 1780s. This timber-framed building endured variable humidity, temperature and lighting conditions. The framed and covered with glass prints, executed in a technique combining etching with copperplate engraving, spent more than 200 years on the walls. Their state of preservation was a proof of the conditions prevailing in the premises of their exposition, but also of their ordeal. Wartime hostilities imposed a rapid relocation of the prints to a secure site, resulting in further damages. However, mechanical damages concerned only the gilded frames. The faith of the Museum itself, the changes of ownership, frequent cataloguing – all resulted in a repeated re-framing and caused a further deterioration of their condition. In the result of these actions, some of the 18th century gilded frames were used to frame engravings from the same French cycle illustrating the Metamorphoses, but purchased by the National Museum in Warsaw after WWII from Jan Kanty Szembek, while some 20th century schlagmetal-decorated frames were used to mount the prints from the royal collection.

To this day survived 30 prints from the Stanisław August collection, 24 original frames with glass, as well as 60 prints from the Szembek collection and their 54 bespoke, schlagmetal-finished frames. Following a conservation carried out in 2012, the royal collection prints rejoined their 18th century frames. Copies modeled on the 18th century pattern were fabricated for items lacking their frames.

Preparations preceding the conservation of the lot of 95 old master prints illustrating Ovid’s Metamorphoses executed in a technique combining etching with copperplate engraving began following a thorough analysis of the prints’ state of preservation. The lot may be divided into three main groups:

The prints belonging to the first group constitute a lot of illustrations destined for a four-volume edition of Ovid’s works printed in Paris between years 1767 and 1771.

The mounting of the first group of prints was a quite complex affair. All the elements are ca 17 x 23 centimeters in size (similar to the print). The mat, without later additions, is a quadruple layer of paper. The first two layers are made of a ca 0.5 mm thick handmade paper, the lower layer of a lower quality paper, the upper – a higher quality laid paper, of slightly lighter shade. Onto the face side of this layer was pasted the smaller print, also on a laid paper, ca 13 x 19 cm in size. A 2 cm margin of bare paper from the lower layer was left around it. This field was used  for a decorative border made with a 1 to 1.5 mm-wide gilded paper band pasted around the print, then ink-drawn French lines and, between them, a painted, 7 mm-wide green panel. This type of ornament was used for all the 30 surviving prints and this type of mounting was made expressly for King Stanisław August. During later years, the prints were often removed from their frames and reframed. Unfortunately, they never had any additional cardboard back to protect the reverse. When a print was removed from its frame, the paper stripe binding it to the frame was cut, resulting in some of the paper remaining on the reverse of the paper mat, and some on the frame. During 200 years, the back of the mounting acquired a thick and rigid layer composed in some places of 10 different papers and bands bonded with various types of glues. The central part of the reverse remained clear, although covered with all kinds of stickers and catalogue numbers, also to be found between and under the attached paper bands. The mountings were not hermetic, thus in some places the prints gathered much dust. Their surfaces displayed stains of various origin, including the so-called foxing stains possibly explained by the presence of iron particles in the paper mass, as well as the activity of microorganisms. These stains were very difficult to remove, even when using the most up-to-date reactants.

The prints from the second group have the same size (ca 17 x 23 cm), but their mountings were of a much simpler construction. Prints were stamped on a warm, grayish laid paper; visible countermarks and filigrees point to a French paper from Auvergne mills. All the 60 prints still sported impressions left by the matrix and the margins had not been not trimmed. The prints had cardboards protecting their reverses, unfortunately of mediocre quality. This caused the emergence of uneven dark blotches and stains on the prints, also visible on the faces. The prints’ condition widely varied. Some of the papers kept their light and even coloring, while other became almost brown-gray with time.

The third group was constituted by large in folio prints with affixed border stripes. The largest one is 60 cm wide and 50 cm high. Their state of preservation was equally poor. Their surface darkened and was covered by irregular stains. This was caused by an inadequate support constituted by thin wooden boards separated from the print only by a layer of paper. The wooden support, particularly if the content of resins is high, causes a rapid oxidation and darkening of paper. Often such damages are difficult to remove in a manner that is safe for the artifact. To the prints’ edges were pasted stripes with a painted border. This is an authentic 18th century ornament, much alike the ornaments on the prints in the first group. The only differences lie in the width of the border and the intensity of the green color, darker on the affixed stripes. In one case a band of gilded paper is situated close to the paper sheet’s edge, and not near the print. On the reverse of the paper mats supporting the prints pasted to them there are notes written in an iron gale ink and, in some cases, a pitting visible on the print’s face. 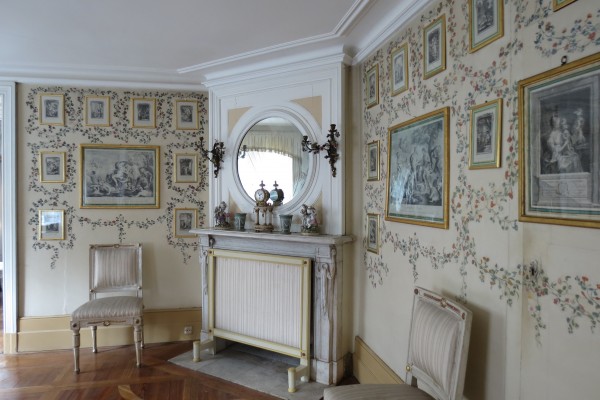 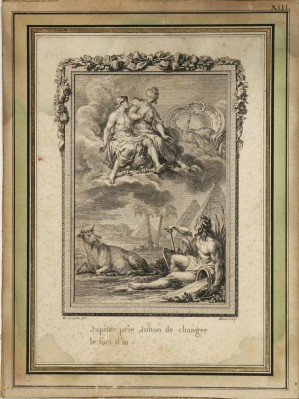 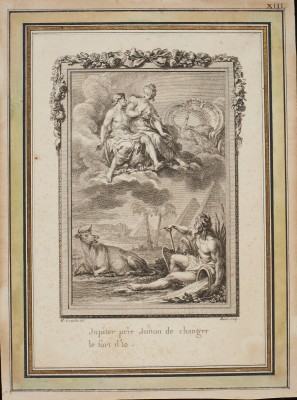 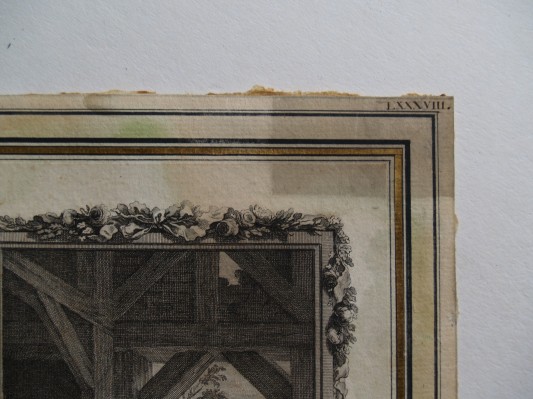 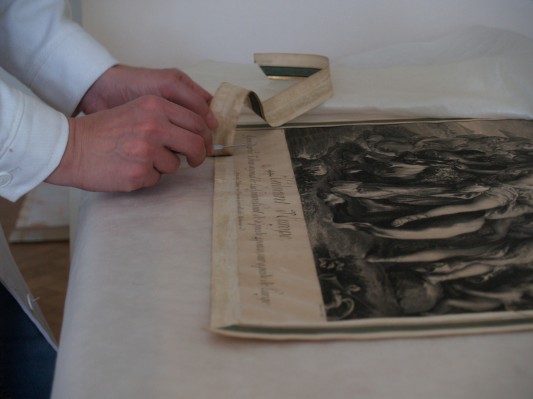 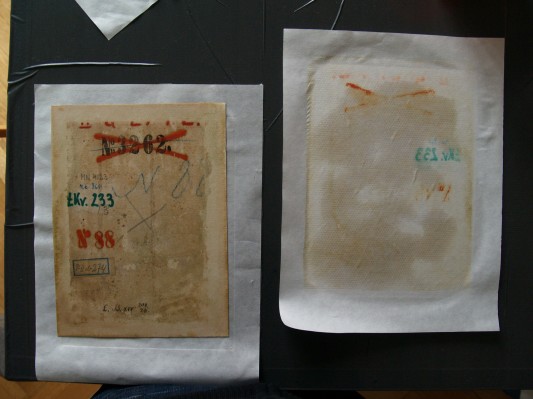 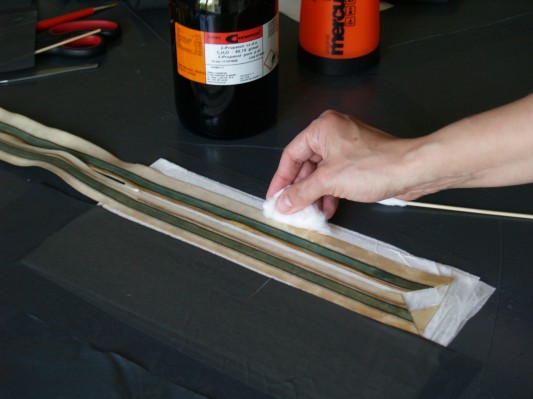 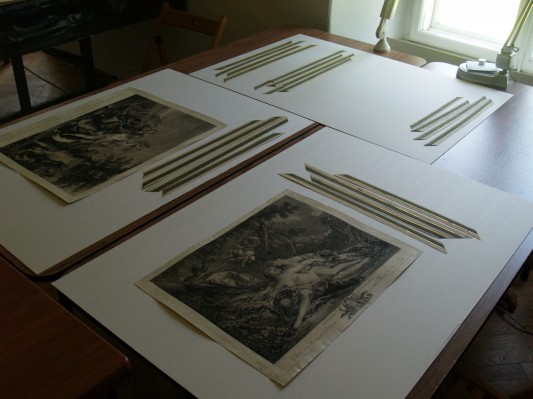 The conservation of the entire lot constituted a great challenge. It mainly concerned the prints from the first group. It turned out during work, that a separation of layers would have been too hazardous procedure, as the adhesive used to join them was resistant both to dampening and direct application of water. Only a slight swelling of the adhesive was noticed. The thick layer of paper and paper stripes pasted to the margins on the reverse and causing the warping of the original mounting including handmade paper was removed mechanically. This was indispensable to ensure a correct stability to the print itself. After mechanically removing grime, all the cleaning procedures were carried out on a vacuum table; soilure was absorbed into blotting paper. Besides water, stains were also removed with alcohol, acetone and other reactants. Highly problematic were the catalogue numbers written on the reverse with a green felt tip pen. These traces, despite three layers of paper and glue, were visible in some places on the prints’ face. It was possible to remove a surplus of the green dye from the prints with alcohol, by draining it off into underlying blotting paper sheets. Other procedures were standard ones – the prints were dampened and slightly pressed between cardboard sheets and wooden boards; the cardboard was frequently changed to eliminate humidity.

The prints in the second group were cleaned in a similar manner. Contrarily to the first group, they were subjected to standard baths and deacidified in a calcium hydroxide water solution. However, it was indispensable to keep in mind the preserved matrix imprint. Due to that, the final pressing was performed using additional soft blankets, which saved the matrix imprint from being flattened.

Large prints from the third group, after being cleaned mechanically, were dampened to separate the borders. Due to the properties of the glue, the dampening had to last ca 12 hours. After verifying the solubility of materials used, the borders were subjected to safe baths on a vacuum table, The prints themselves were subjected to normal water baths in basins and deacidified in a manner similar to the prints from the second group. The borders, after performing the so-called self-tensing by clamping the damp stripes at their ends and allowing them to dry, were glued into their original place, after which the sheet with its borders was flattened once again under pressure.

After conservation, the prints were separated with acid-free cardboards and left to stabilize.

To ensure the prints’ safety, at the end of 2011 the Museum decided to remove the originals from the exposition and to replace them with facsimiles. The exact copies were realized according to the 18th century patterns. Borders were executed by hand on a custom made linen & cotton laid paper using authentic techniques and materials, including ink, watercolors and a thin gilded paper for the stripes. A highest-quality pigment-based printing technique is a guarantee of the prints durability. Natural reversible adhesives were used to bond the mat layers do exclude risks of papers’ color variations. The facsimiles of the 18th century prints will be mounted in original frames and returned to their initial place of exposition on the White Pavilion’s second floor. Originals will be kept in premises ensuring optimal storage conditions and thus safeguarding them for the future