CONSERVATION OF THE ROYAL COLLECTION OF GYPSUM SCULPTURES

During his reign, Stanisław August Poniatowski, the last king of Poland, strived to create an Academy of Fine Arts. To this purpose, he assembled over many years a collection of gypsum casts intended to serve as patterns and didactic models, but also as classic style and taste exponents for future art students. The monarch built his collection by importing gypsum copies cast from the most precious sculptural works of art held in museums and collections in Italy, France, Germany and England.

At the end of the monarch’s reign, this collection comprised 542 items. Some of the casts became the ornaments of certain royal interiors, i.e. in the Old Orangery, where a gallery of sculptures was planned. Owing to the important historical rank of the surviving fragment of the royal collection and its less than satisfactory condition, a decision was taken to carry out a full and exhaustive conservation of the lot.

Most often these were works of antique art were complemented by the most outstanding contemporary sculptures, but also baroque or renaissance ones originating from Western and Southern Europe. The royal sculptural repository was enhanced with the heads and busts of distinguished Poles from the ruler’s close entourage. The King  commissioned these portraits to court sculptors. Most of the designs for the collection never materialized. Shortly after the King’s death, the repository was moved to the site of the University of Warsaw, where it was enriched with casts from Paris and Berlin foundries. The expansion of the collection was realized according to iconographic principles and assumptions enounced by its founder. During Nazi occupation, the sculptures have been destroyed in a large extent. At the end of the 1960s, most subsisting casts were moved to Łazienki Królewskie, to the Old Orangery building. The collection was enlarged with gypsum copies from a Brussels foundry.

The conservation program is linked to a newly realized project regarding a target exhibition referring to the historical projects of Jan Chrystian Kamsetzer, the court architect of Stanisław August. This coincided with the discovery of the wall paintings’ relics in the Foyer of the Winter Garden of the Old Orangery. A major part of the sculptures which underwent conservation will be exhibited in these premises. 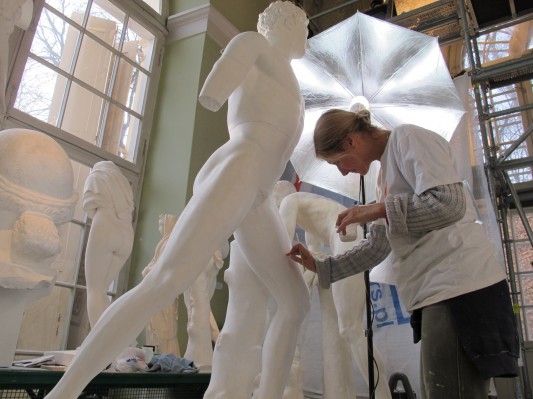 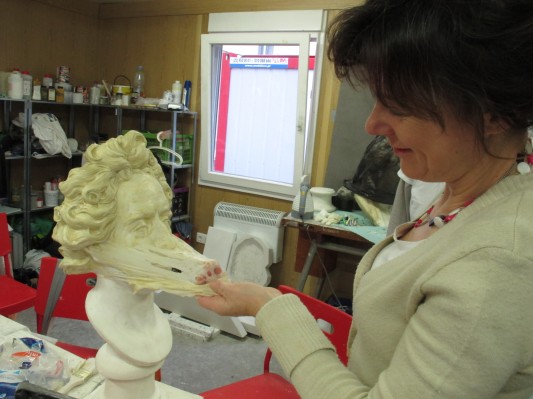 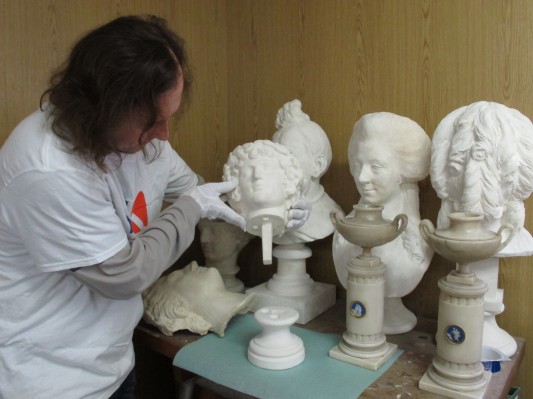 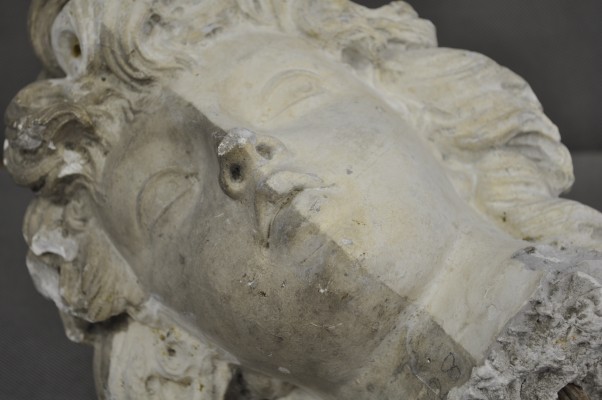 The conservation of the collection of casts is realized in stages. It has been programmed over many years. The first lot of 65 casts underwent conservation in 2012. This endeavor was honored with the Sybilla prize awarded to the Łazienki Królewskie in the category of Conservation of Museum Objects by the Ministry of Culture and National Heritage. In 2013 came the turn of another lot of 61 casts from the collection. The conservation of a successive lot of 35 sculptures is programmed for this year. Many casts subjected to conservation had secondary paint layers which accumulated dirt over the years. After the removal of this dirt, the original color of the plaster was revealed. In many instances, the casts exhibit varying hues of the plaster binder. For example, the bust of Hippocrates (ŁKr 594) was tinted in the mass with a light pink. Following the removal of paint, the busts representing Roman emperors – Nero (ŁKr 642) and Tiberius (ŁKr 637) revealed two colors of plaster used to make the casts. The plaster with a warmer hue was used for garments, while a lighter hue was used to cast the head, neck and base. I both cases, such two color diversity was a conscious reflection of the original ancient marble sculptures, in which a white marble was used for fragments of the body and base, and a colored one for garments. This preservation of coloristic differences was taken into consideration when carrying out a coloristic consolidation of all the items in the royal collection. 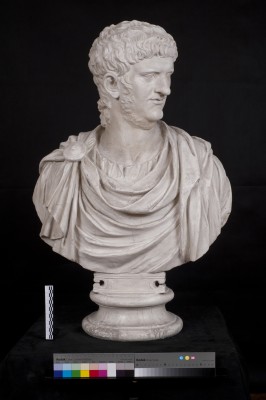 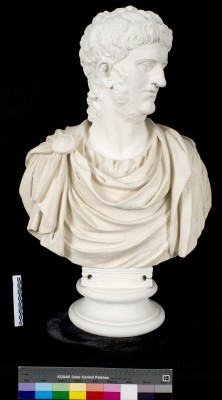 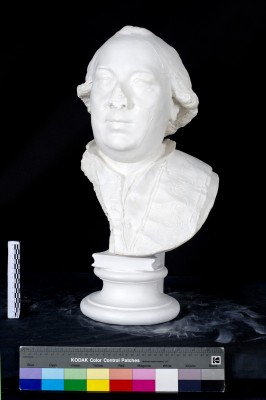 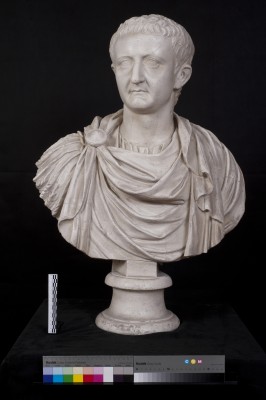 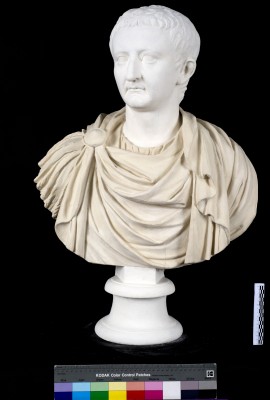 The bust representing king John III Sobieski (Łkr 717/1) is a gypsum copy probably cast from a wooden sculpture. This hypothesis is supported by the character of chisel traces visible on the cast in the parts of the armor. Cuts and furrows typical of wooden sculptures are also present in the parts of the ears and on the bust’s garments. Such conclusions are inexistent in former descriptions of this representation. These observations were made during the current conservation of this object. They provide an additional knowledge about the archetype and its technology. In the course of ongoing conservation endeavors, in several instances multipart casts were assembled along damaged technological joints. Such was the case of a sculptural ensemble representing two youths – Castor and Pollux (ŁKr 685). After the repair of two contact surfaces and the elaboration of suitable couplings, the heads of figures were reattached. The plans for this year include the assemblage of the figure of an Aeginetan warrior with an arm holding a shield (ŁKr 535). Such measures enhance the artifact’s display value. The sculptures of Poseidon (ŁKr 709), Silenus (ŁKr 568) and the mask of Queen Omphale (ŁKr 586) were highly unstable and exposed to the risk of tumbling. For this reason, these casts acquired suitable plinths taking into account the objects’ static specificity. The head of Henryk Lubomirski (GRz 1362) and the bust of Pius VI (ŁKr 716/2) were provided with profiled, circular supports, owing to which their status changed from “storage” to “exposition”. The installation of supports is also anticipated in the case of numerous heads, busts, and even torsos during this year’s conservation endeavors. When organizing and systematizing the collection, in the Destructs Storage were found three additional fragments of the Medallion with the likeness of the king’s brother, archbishop Michał Poniatowski, which conservation was completed in 2012. The conservation and the reattachment of the recovered  fragments to the incomplete medallion is programmed for this year. In some cases, cleaning procedures revealed 19th century inventory markings, until now obscured by accumulated dirt and secondary paint layers. Such discoveries were made during the surface cleaning of the figures of the Dionysus Borghese (ŁKr 600), the sculptural group of Castor and Pollux (ŁKr 685), and the head of the Belvedere Apollo (ŁKr 633). Historical inventory numbers are irrefutable proofs of the artifacts’ origins and identity. Some of the casts (mainly large figures) were reinforced in the area of legs and plinths. A stiffening of the construction was achieved by introducing glass-fiber rods. To remove deposits strongly imbedded in the plaster support, a decision was taken to use the laser ablation method. This method is highly efficient and totally safe for the historical substance. It provides the possibility to selectively remove harmful deposits without using chemicals, thus preserving the original surface texture and character.