The sundial located on a small round square at an alley intersection near the New Orangery. It is a modern sculpture made of bronze, set up in 2012. It was made by Adam Myjak, a Professor of the Academy of Fine Arts in Warsaw. The sundial’s pointer (gnomon), is a slim, human-shaped figure with a tall, upwards pointing cone in place of its head. The round square on which the sculpture stands is the clock’s horizontal dial. On its surface, Roman numerals are embedded on an elliptical plane. However, there are no hour lines.

This sundial alludes to the analemmatic sundial, whose pointer is movable; it is often a person standing in the middle of the dial. Such sundials decorate numerous gardens and parks around the world. One of them stands in the garden of the Henkenrode Abbey in Hasselt (Belgium). 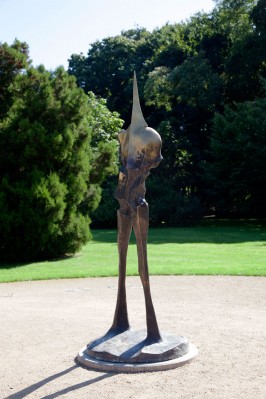