The Sundial with a Satyr

The oldest sundial of the Royal Łazienki has stood on the terrace in front of the south elevation of the White Pavilion since 1777.

It has a round dial made of white Carrara marble (from the city of Carrara in the Italian Tuscany). It is supported by a sculpture of a kneeling Satyr carved from sandstone.

Why is this figure a Satyr? It is a creature from Greek mythology, which inhabited forests and fields - a half-goat, and member of the troops of Bacchus, the god of wine. Satyrs were known for their perverse and lustful character; they were often shown dancing, playing instruments, or chasing young forest nymphs. Such a figure combines well with the idyllic character of the garden of Stanisław August. Additionally, it is not the only Satyr in the Garden - five sculptures of these creatures, which stand near the Palace on the Isle, function as monumental candelabra supporting lanterns.

The making of the Satyr holding the sundial is credited to Johann Chrysostomus Redler, a Warsaw Rococo sculptor.

The Sundial with a Satyr 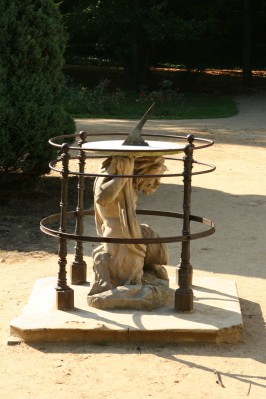