This splendid palace with its characteristic semi-circular form was originally conceived as the King’s primary residence.

With time, however, it began to take on a more official and representative function. Matters of state were discussed in its elegant interiors, and over the centuries the apartments were used to accommodate tsarist generals, members of the Polish government, as well as foreign guests of Polish rulers. Not only were national issues discussed within these walls. Diplomatic relations between two of the world’s super powers: China and the United States of America, were established within the Palace’s walls.

In the years 1958–70 the Myślewicki Palace was the venue for a series of meetings between the Republic of China and the United States of America. At that time the talks held at the Palace were the main form of dialogue between the two countries and helped to forge mutual trust and maintain peace. 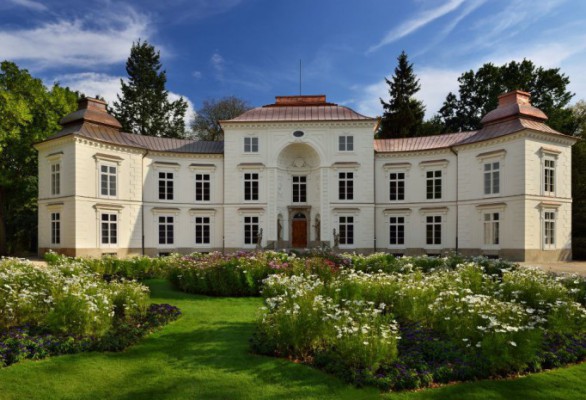 The front façade of the Myślewicki Palace 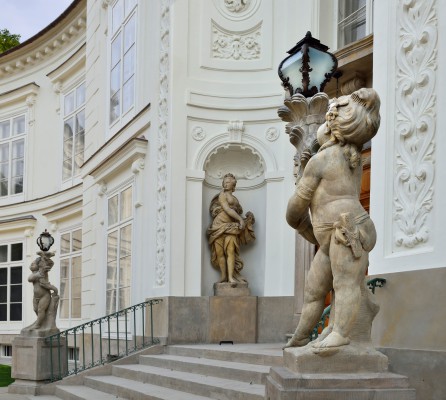 The entrance to the Myślewicki Palace 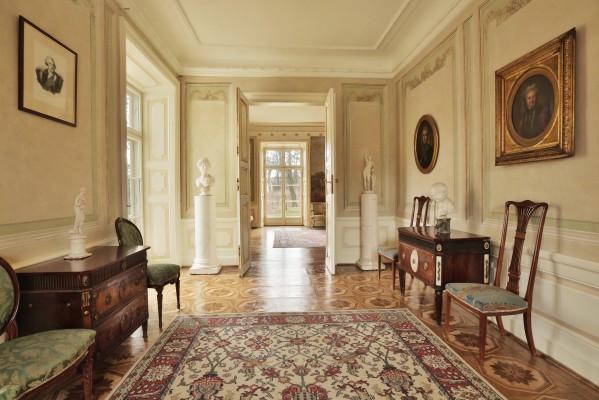 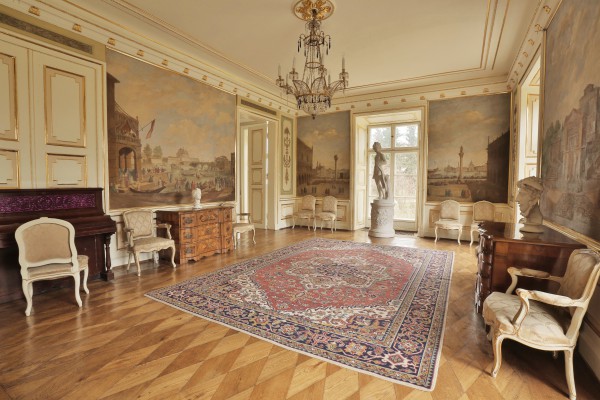 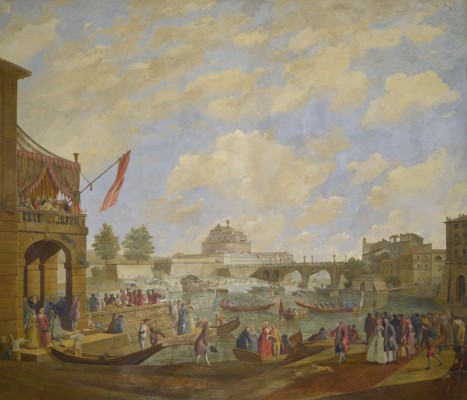 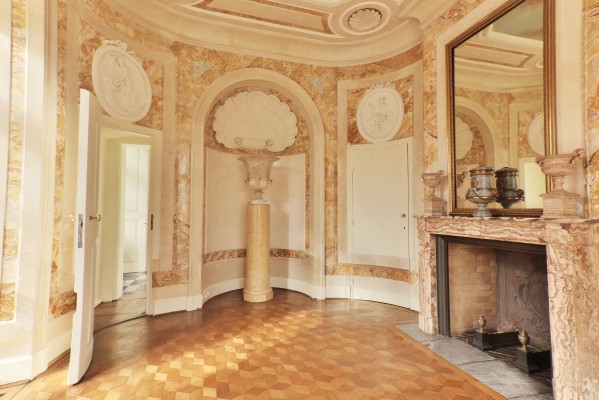 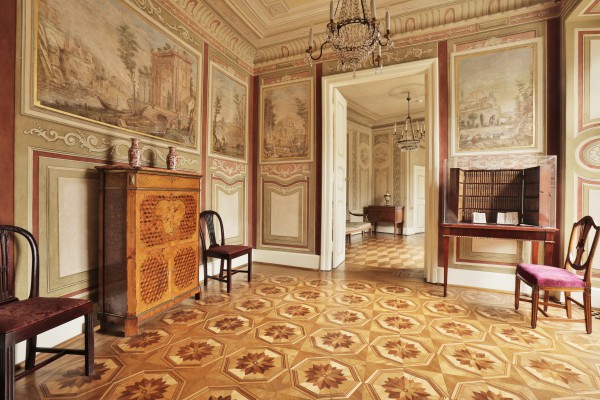 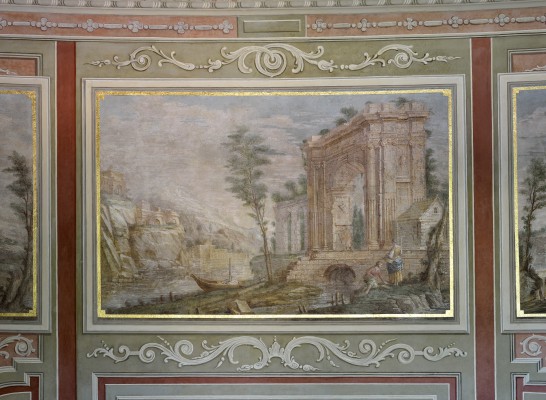 Wall paintings in the Myślewicki Palace 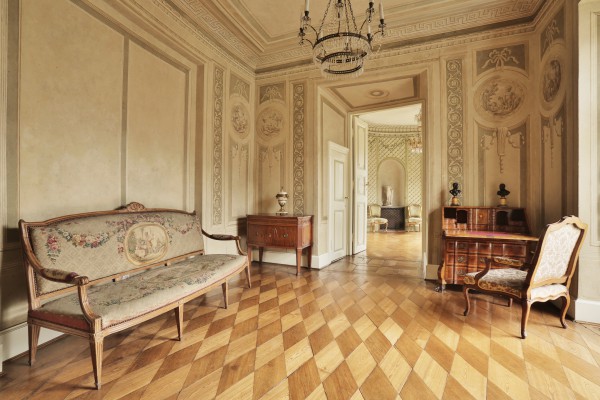 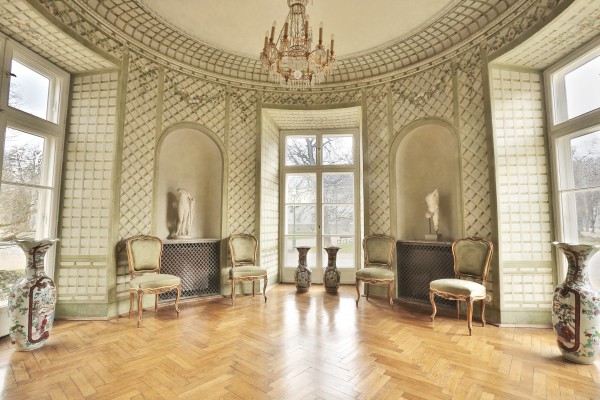 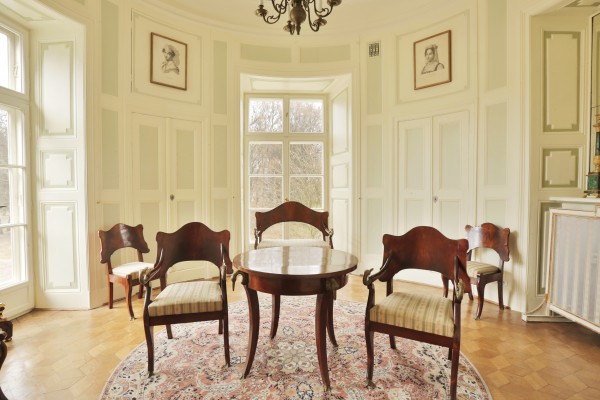 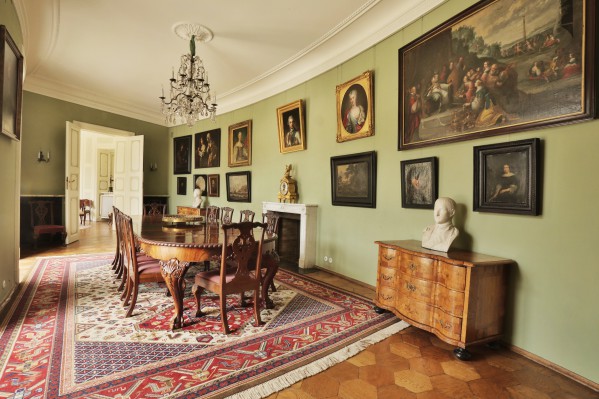 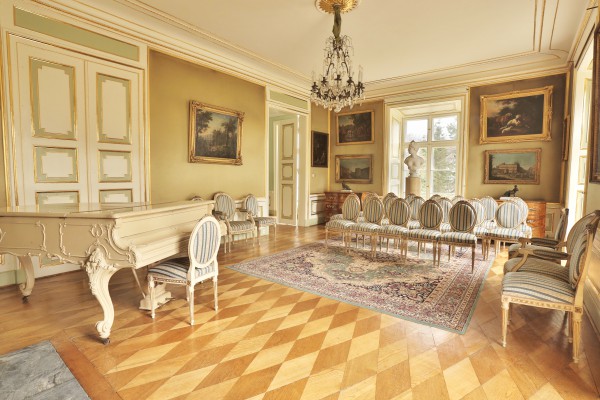 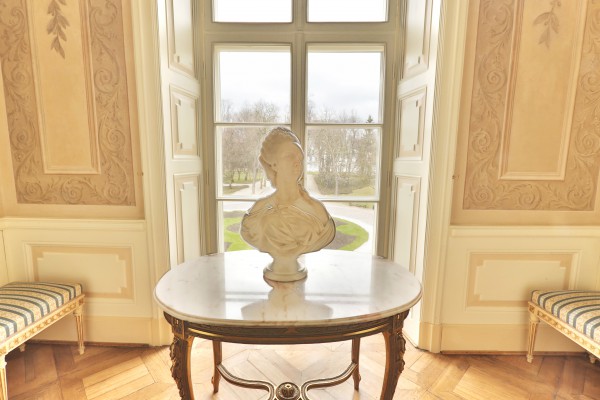 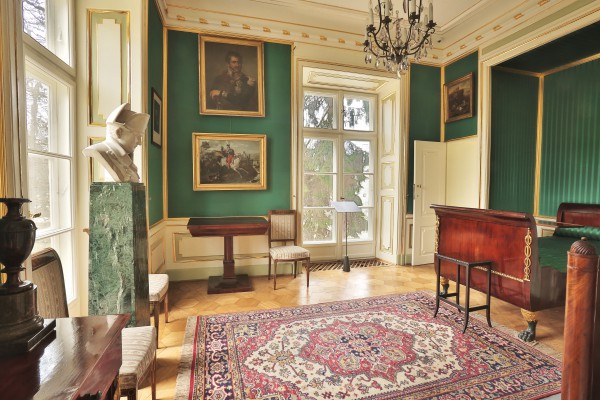 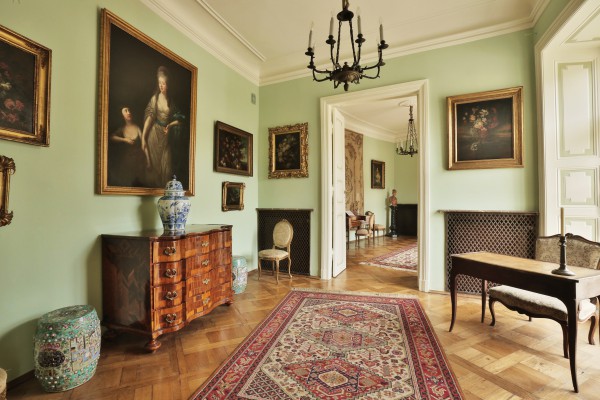 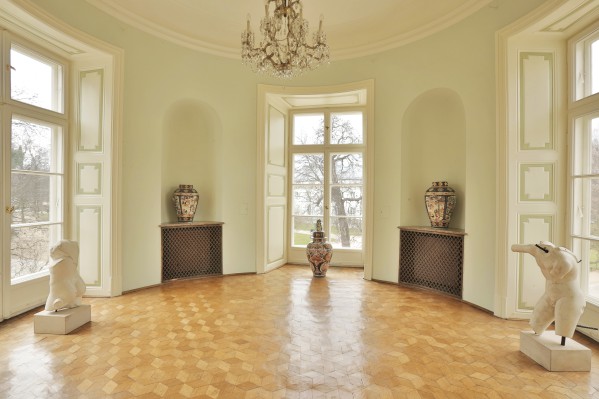 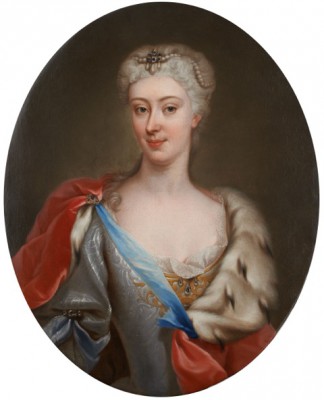 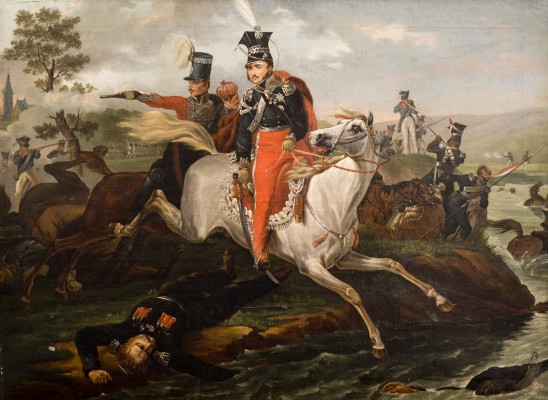 Death of Prince Józef Poniatowski in the Depths of the Weisse Elster River, Marcin Zalewski, 1820 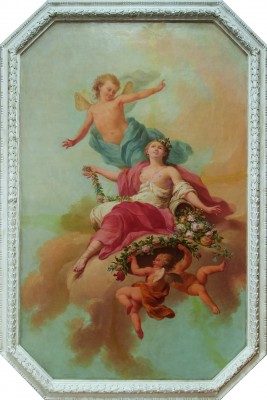 In an almost unchanged state

The two-storey palace – built in 1775 in the eastern part of the garden – owes its name to a past village of Myślewice.

The palace, whose designer was an Italian-born architect Domenico Merlini, gained its present characteristic, semi-circular shape gradually. First, a two-storey villa was erected on the plan of a square and crowned with a rooftop belvedere. In 1777, quarter-circle wings were added on either side. Initially, they were one-floor high and ended with small towers. In the 1780s, they were expanded with another storey.

The main decorative element of the Palace’s façade is a tall niche containing the main entrance. On both sides of the door are statues of Flora and Zephyr (1777) executed by the Royal sculptor Giacomo Monaldi. His are also the sculptures of putti standing near the entrance stairs and holding lanterns. Flora – the goddess of flowers and the season of spring, and Zephyr – the god of the west wind, were a mythological pair of lovers. Their personas – connected with nature and love – emphasise the light, Arcadian, and sentimental spirit of the building.

Despite its small size, the palace is quite imposing. Curved, copper roofs – resembling curved roofs of Chinese structures – give an air of lightness to the building.

The residence is an example of an Early Classicist palace – one of few buildings of this type found in our gardens. It has survived to this day in an almost unchanged state, with most of its interiors preserving the original décor from the times of Stanisław August.

The Myślewicki Palace in old photographs 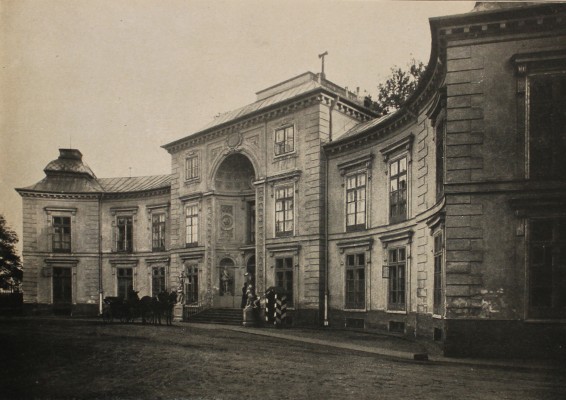 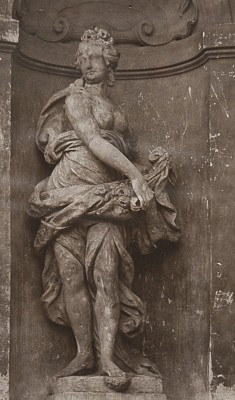 Statue of "Flora" by Giacomo Monaldi from the second half of the 18th century, photo Jan Bułhak, 1921 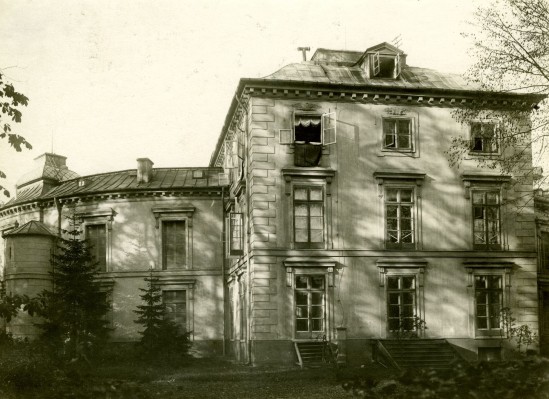 The south elevation of the Myślewicki Palace, photo J.K. Jaworski, 1920 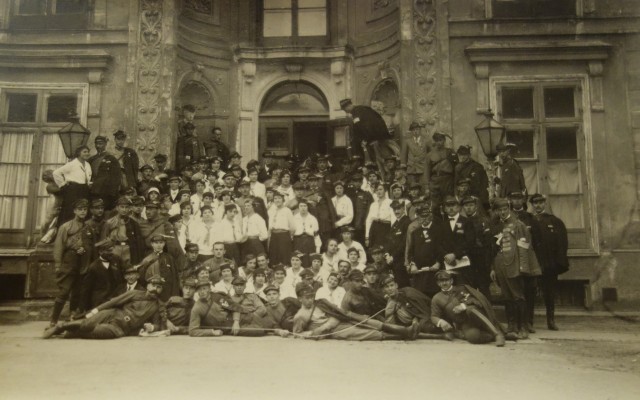 The results of the work by specialists, who made it possible to uncover historical polychromes, can be admired in the Myślewicki Palace.

- Following the conservation work the Palace gained new splendour to reflect its 18th century character - said Piotr Zambrzycki, Chief Conservator of Royal Łazienki. - The conservation of the Myślewicki Palace was very extensive. It covered not only what is visible outside the building, for example the roofs which will become greenish with time when patina covers them, but above all the interiors. We were able to refresh them and to highlight the original palette of colours from the times when the Palace was erected. In several places we managed to uncover beautiful polychromes. Let’s remember that for every conservator the superior aim is to preserve the facility in the form it represented in the past - said Piotr Zambrzycki in an interview with the Virtual Museum.

"New splendour of the Myślewicki Palace - from 7 October".
Find out more in our news.